The most expensive tag is bandied about in practically every product category. But once in a while you hear of unusual products that hit the market. BrickEnvy, a small e-store has announced the availability of the most expensive Lego of them all. The store sells collector grade Lego sets and has now listed a pure gold Lego piece that carries a price tag of $14,450. It is not just the precious metal that makes it expensive but the fact that only a few of these items exist around the world. It is one of the few that were specially made by the company as an anniversary gift.

Between the years 1979 and 1981 the company gifted this 14 carat gold Lego brick weighing as much as 0.8246 ounces to its select business partners and Lego employees who had worked for at least 25 years at the brick building factory in Hohenwestedt, Germany. Only two such anniversary gifts were made in a year. So it is safe to guess that only six such pieces were made. It is not clear as to how this rare brick came into the possession of BrickEnvy. It is a standard 2×4 inch piece that is specially gift packed. Specially created ring size box has a velvet interior with the Lego logo embossed on the fabric. 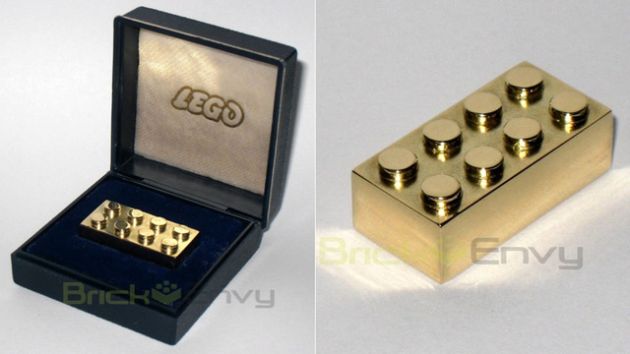 The Origin of The Listed Golden Lego is a Mystery

The rare brick has been crafted out of 14 carat gold. Since its origin is a mystery, the online store is not providing any documentary certification with the golden Lego. It is a beautifully crafted piece that will be an attraction even if it is not certified by the makers. It can easily score over any of the high tech Lego contraptions that are flooding the markets today. This rare piece was originally made for some Lego legend but you can own one even if you never worked for the brick building company. You simply have to visit the online store listing it and should be willing to shell out $14,500.

Written By
Myra
More from Myra
These days, consumers want home accessories that are cutting edge. This has...
Read More