Ever heard on water garages? Well, if not then let’s gets educated.

Swedish yacht builder Strand Craft has been planning a new 14,000 horsepower super yacht with a built in garage and additional supercar located at the stern of the ship. At his point little is known about the supposed supercar. The Twin turbo engine will power the Tender producing 880 HP and can reach a top speed of 370 km/hr (230 mph).

The yacht is 122 foot (38 meters) long and features an Art Deco interior, several salon areas, crew cabins and four double staterooms. Each cabin is further equipped with 52 inch LED TV’s and Bang Oulfsen sound systems. Additionally the power comes from twin Rolls-Royce engines along with an optical booster engine sporting over 14,000 horsepower and a top speed of 55 knots. It has a sharp design and looks very slick. Just what the millionaires want. It is the nemesis of the current age.

Presently the price of this world’s coolest tender is unknown but it definitely will be one of the most expensive garages on water. It sure does look promising. The motto adopted by Strand Craft to break into the mega market is “Satisfying the new demands expressed by the market, and above, all surprise them”. 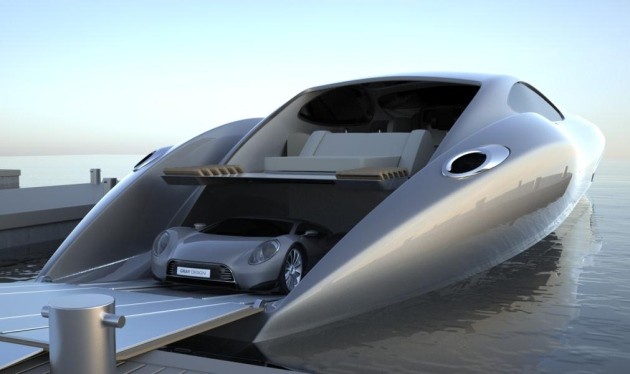