Cartier has turned on all engines for the upcoming SIHH 2012 and has announced a limited edition series of the luxury brands famous Crash model, in addition to several new creations. I am sure most of you will find the dial quite odd-looking at first sight. It seems as if the metal has molten and become disfigured due to excess heat. But you will be able to appreciate the aesthetic value of this watch once you know the story behind. Infact it will also clear the mystery behind the name of this series.

In the 60s, a Vice-president of Cartier had a terrible car accident, which resulted in a fire, melting his watch on his wrist. The watch he was wearing that time was an oval Cartier Bagnoire Alongee, which due to the high temperature took the form of Dali’s melting watches or “the camembert of time”. Jean-Jacques Cartier, who was the head of Cartier London that time found the limp dial shape to be unique and inspiring, and thus emerged this historical Cartier design. This series was first launched way back in 1967 and was re-issued as a limited edition of 300 watches in 1991. For the SIHH 1993, Cartier came up with platinum version of the design, and then moved on to creating diamond dress versions for ladies. 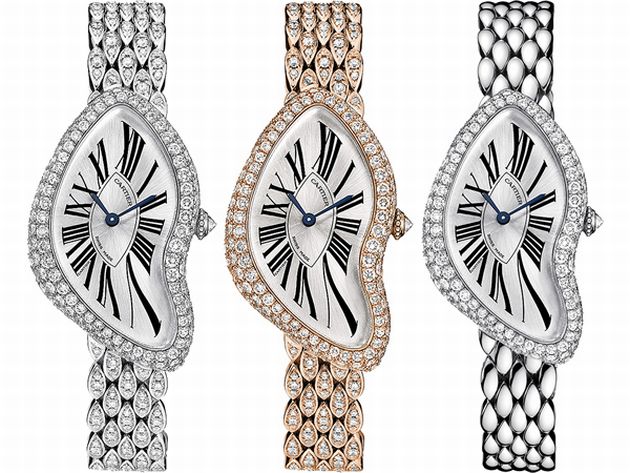 Ever since it was first released in the late 60s, the Crash series has gone on to become a favourite for collectors, with its value rising meteorically.  For SIHH 2013, we can see four new avatars of the Crash edition, designed for ladies. The bracelets for this collection have diamond encrusted in white or pink gold, making it look like delicate dew drops. Each watch is individually numbered and will be available only at select Cartier stores. These timepieces have a manually wound movement and come in two versions: the simpler version adorned with 150 diamonds of approximately 2.15 carats, while the all-diamond version adorned with 471 diamonds of approximately 4.27 carats.

Written By
Myra
More from Myra
A comprehensive restoration is harder than creating a new property from scratch....
Read More