The 223-year-old, personal Constitution copies and Bill of Rights of George Washington are going to be sold at an auction in New York which offers bidders the documents on 22 June. The Christie’s Auction House’s estimation of these two items is between two and three million dollars. According to senior specialist of manuscripts, Chris Coover, the personal copies and drafts about the Acts of Congress and Bill of rights along with President’s handwritten notations give us a clear picture of the former president and his determination.

The copy bound by Thomas Allen in 1789 was one of the three copies. The other copies were given to President Thomas Jefferson and John Jay, the Chief Justice of Supreme Court, the US. The document ranks among the items such as 1864 victory speech of Abraham Lincoln and Shakespeare’s first folio. The books are in very good condition as great care has been taken by the owner and the paper used was of thick, unmarked and best quality with pencil scribbled notes in the margins. You could see his name Washington on top right corner of the title page. Washington used pencil to annotate the constitution. 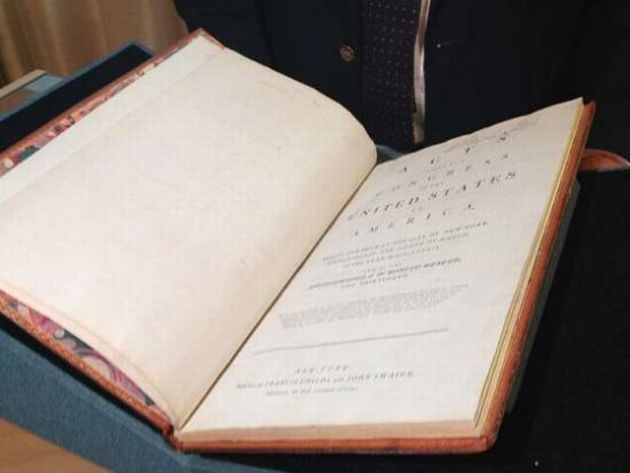 After the president’s death, the Constitution’s copy remained at the library of Mount Vernon. However, copies of the Constitution reached finally Dietrich in 1964 at an auction which fell into various hands of President’s relatives. The annotations did not have Washington’s signature in margins make it unique. Within two months of his assuming office the Bill of Rights was amended and inspected which contains twelve amendments. According to the auction house Christie’s, the notation throws light on President’s conscientious and careful approach to his responsibilities and power in his first term.

Written By
Carlos
More from Carlos
Scatter shelf is created from the design studio Nendo in Japan. It...
Read More