Cartier is gearing up for the SIHH 2013 and has released previews of two exciting new watches prior to the main event which will be launched on January21, 2013. The watches will be unveiled officially at SIHH 2013. The first watch that was released for a pre-SIHH 2013 preview is the Rotonde de Cartier: Panther with Granulation. It is a fabulous watch which forms part of the Cartier d’Art line that boasts of several other watches that showcase different artistic crafts mostly displayed as part of the dial decoration. This Rotonde de Cartier watch has a dial which is decorated with a panther which has been crafted using very small gold granules.

The Cartier Watch has Revived the Millennia Old Craft

Seeing the finished product it is difficult to imagine how painstaking the whole process of creating the image of a panther on the dial is. The incredible result has been achieved through an ancient and immensely time consuming craft. But the final result of a sparkling and shimmering reproduction of a panther in 22 carat gold has been worth it. The prime examples of similar craftsmanship are the Etruscan granulation applied objects dating back to the first century. The Cartier watch has brought back the millennia old craft back to life and made it one of the most exclusive and desirable watches. 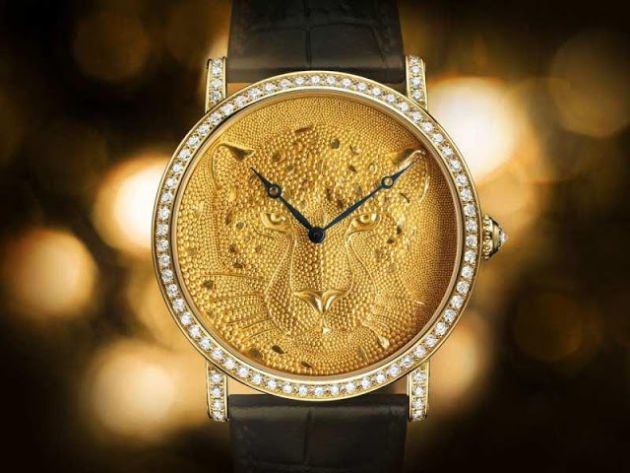 Only Twenty Pieces of the Limited Edition Watch Will be Made

Cartier has reinterpreted the ancient craft in its own unique way and made it modern and contemporary. The tiny 22 carat gold granules are applied individually by hand. It is a precise craft as you apply one granule at a time to build the final picture. The tiny granules are cut from a gold thread and then heated and applied. It was finally fused to the base of the watch. The final picture has achieved a sparkle that changes when seen from different angles. The case has been crafted out of 18 carat yellow gold and has been embellished with 306 brilliant cut diamonds totaling 3.63 carats. The case back is sapphire crystal. The limited edition creation will have a run of only twenty pieces.

Written By
Myra
More from Myra
Now here is a museum I wouldn’t be the most exited to...
Read More