Amy Jade Winehouse‘s self portrait drawn by her own blood will come under hammer in the upcoming auction at the Cob Gallery, London, on Friday 11 May. The painting is the joint venture of late Amy and her friend Pete Doherty which is expected to fetch approximately £80000 in the auction. The composer and singer Amy was well known for her variety in musical styles including rhythm and blues, jazz, soul, and rock ‘n’ roll.

Pete Doherty used arterial splatter technique in which the artist uses a syringe to draw the blood out or extract blood from the cut finger and later splatter it on the canvas. The auctioning portrait is unique as it is painted with Amy’s own blood. According to sources there are huge collectors interested to own the genuine piece of Amy. The painting’s auction might be disapproved by Winehouse’s father Mitch Winehouse who had never liked the influence of Pete in Amy’s life. She was on phone with her dad while the portrait was being drawn. 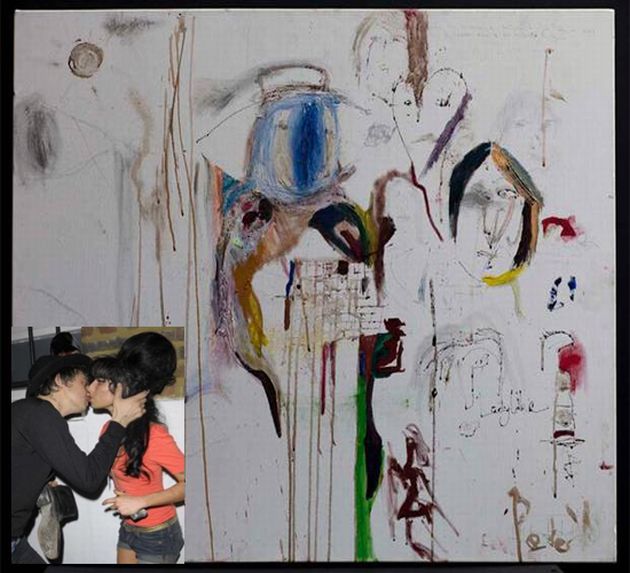 The lady like is an artistic expression of Pete’s band The Libertines. The blood always will have major part in his art work. Along with the artwork, the auction features other possessions of Pete including military jackets, lyric books, private diaries and stage outfits and traditional writing desk.

Recently the rocker had presented an exhibition named On Blood: A Portrait of the Artist which was a success and also threw some light about his odd things collection. The exhibition featured more than fifteen blood paintings out of twenty showcased items.  Winehouse’s painting was also exhibited at the event. The Foundation of Amy Winehouse will be benefited by a portion of the sales proceeds.